Paging through the hundreds of hidden cameras available from BrickHouse Security, you may be surprised to see this disclaimer at the bottom many pages: "Due to federal regulations, this camera does not record audio." You may ask, what federal regulations? And why?

The federal law that applies to audio recording is US Code Title 18, Part 1, Chapter 119, which you can read in full here. This law is a federal prohibition on the sale and use of devices designed to covertly record the voices of people without their consent.

The law specifically states that:

“… Any person who intentionally… manufactures, assembles, possesses, or sells any electronic, mechanical, or other device, knowing or having reason to know that the design of such device renders it primarily useful for the purpose of the surreptitious interception of wire, oral, or electronic communications, and that such device or any component thereof has been or will be sent through the mail or transported in interstate or foreign commerce… shall be fined under this title or imprisoned not more than five years, or both.”

The law makes it clear that it’s illegal for BrickHouse Security to sell certain types of audio recording devices—and it’s illegal for a US citizen to possess and use them to surreptitiously record the private conversations of others without their consent. There is an exception to the law governing the sale and use of these recording devices to authorized law enforcement agents, which is explained in more detail below.

While it’s possible to purchase hidden cameras with audio recording capability on the internet from disreputable dealers, you should know that by doing so, you’re risking up to a $250,000 fine and up to five years in jail.

In the United States, regulations governing audio recording are drastically different from laws governing video recording—crucial differences that come down to matters of privacy and consent. Here’s a primer on both.

Laws regulating video recording boil down to one key factor: Do I, as a citizen, have a reasonable expectation of privacy where I am? If the answer to that question is yes, then odds are you are not legally allowed to be recorded without your expressed permission. For example, if you're walking down the street, you may be recorded by a myriad of cameras without your knowledge: Traffic cameras, security cameras monitoring the exterior of buildings, news helicopters flying overhead, etc. Under the law as it relates to video recording, you have no reasonable expectation of privacy when you're in a public space—if you can be seen by the naked eye, it's safe to assume that you can also be seen and/or recorded by a video camera.

This same rules apply to commercial properties. By entering a store you are exiting an outdoor public arena, but you're then subject to the store's public space. In the same way you wouldn't expect privacy walking down the street, you wouldn't expect it walking down the aisles of a department store. The moment you enter a changing room or a restroom, however, you are afforded a reasonable expectation of privacy. And, should you find out you're being filmed in that private space, the store is legally liable for that invasion of privacy.

Many employers will use surveillance cameras, or hidden cameras, to protect and monitor their employees in addition to their customers. In many ways, employee monitoring is subject to the same regulations as public recording: Cameras aren't allowed in places where employees have a reasonable expectation of privacy. That said, some employees expect a certain level of privacy in their personal workspaces, for example, making the regulations slightly more complicated. If you’re a business owner or manager, the best rule of thumb is to always notify employees of any video recording devices in use at your place of business (audio recording is not permitted without the expressed consent of all employees, which will be discussed later in this article). Additionally, it is illegal to record employees' union activities due to regulations codified in the National Retail Labor Relations Act.

In your own home it's a given that you yourself have a reasonable expectation of privacy. Someone entering your home, however, is subject to the same expectations of privacy they might have in a department store. Think of your baby's room as the aisles of your store—a nanny shouldn't expect privacy there—and therefore you are given the right to record her. The moment she enters a space deemed private—such as a restroom, or a personal bedroom she may have in your home—she should expect privacy and consequently can't be legally recorded.

It is always best to consult your own state's regulations when it comes to audio recording rules. If you have additional questions, contact an attorney in your area. 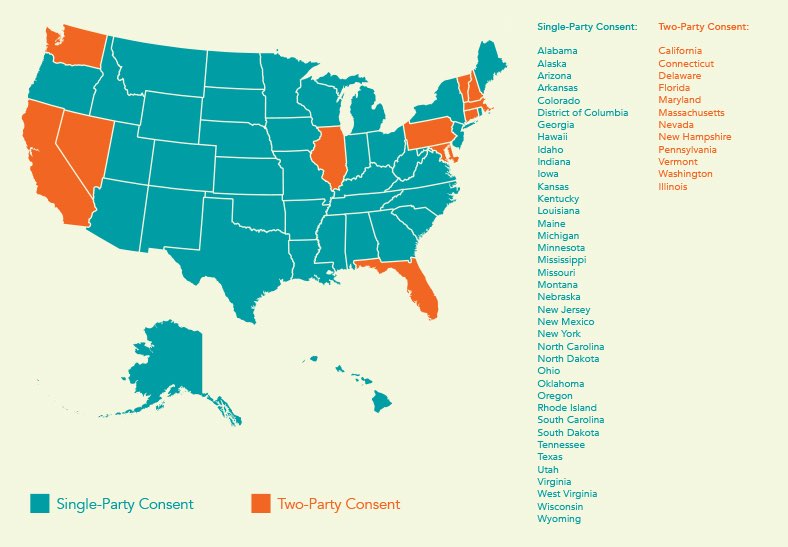 Audio Recording: A Matter of Consent

Unlike video recording, the laws that govern audio recording deal with one-party versus two-party consent, and they vary from state to state.

“Zero party consent” is when none of the parties being recorded are aware of the recording, and this is prohibited by federal statute as explained above.

Hidden cameras sold by BrickHouse Security that feature motion or sound activation simply avoid the issue of consent by removing the audio recording function entirely. If the person operation the camera must be present to activate recording then by definition they are the one party who has consented to be recorded. By disabling audio capabilities, it takes away any legal gray area with regard to consent. And because audio is removed, you're able to deploy video recording to monitor your home or business (in any place where those being recorded have no reasonable expectation of privacy).

Exceptions to the Rule

BrickHouse Security does offer devices that capture both covert video and audio exclusively to law enforcement agencies. With a warrant, police officers are given the legal protection to record covert audio and video without the consent of any party.

As previously mentioned, body-worn recording devices enable you to capture covert audio as long as you're present during the recording (in single-party consent states only).

Some of the hidden cameras offered by BrickHouse can have their audio recording capabilities enabled for use in law enforcement operations.

BrickHouse also offers professional surveillance systems capable of recording both audio and video. In order for these cameras to legally do so, however, they must be prominently displayed and obviously noticeable by whomever is being recorded. There must also be clear signage with an announcement that the premises are being recorded by audio and video before entry, or a waiver consenting to such recording must be signed by all who enter.

This same principle applies to more webcam-like recording devices. Cameras like the Nest Cam (formerly Dropcam) or the CueCam are two-way audio enabled. Because they need to be displayed prominently to record, much like professional surveillance cameras, the assumption is that anyone using the camera is required to acquire the consent of whomever is being monitored.

Think Within the Law

Remember, if you submit evidence to the police or a court that was captured with an illegal device or in an illegal manner you might face harsher treatment than the person you caught in the act. Know your rights and comply with the law at all times. When in doubt, consult with an attorney in your area.

BrickHouse Security does not condone the illicit use of cameras or any of the devices we sell. By removing audio recording capabilities from our hidden cameras we’re simply adhering to U.S. law while providing the tools you need to ensure that your child or parent or business is safe—without compromising the rights of those being recorded.